Panic attacks, depression, loss of weight and appetite, and a recurring sense of hopelessness have become a regular part of Mustafa’s life. He now lives in Germany, far from a war zone, but his past experiences of detention, torture, and living amid death and destruction still haunt him.

“I don’t go out a lot. I have problems with trust. I cannot trust people because in Syria you cannot trust anyone,” he told Al Jazeera in an interview under a pseudonym for his safety.

Mustafa’s story is all too common. 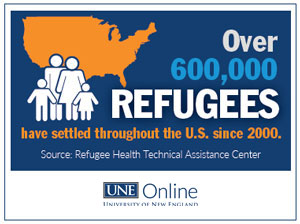 The United States has seen over 600,000 refugees from Somalia, Vietnam, former Soviet republics, and beyond settle throughout the country since 2000. Studies estimate that 10 percent to 40 percent of these adults and 50 percent to 90 percent of these children suffer from post-traumatic stress disorder (PTSD), including intrusive memories, hypervigilance, intense distress at environmental triggers, disassociation, and chronic problems with mental functioning, like outbursts of anger and difficulties concentrating.

The prevalence of PTSD is not surprising when you consider the traumas many refugees have endured. What may be surprising: how often it goes undiagnosed and untreated. Although PTSD is included in the CDC guidelines for screening newly arrived refugees, the institutions that process and serve refugees may lack the training and resources to deal with PTSD issues. Moreover, distrust, cultural mores, and a sense of shame about both the trauma and seeking treatment may prohibit refugees from sharing the deeply personal information that would lead to a diagnosis.

This means that many cases of PTSD go without timely identification and treatment.

And this is critical to managing PTSD symptoms. “PTSD does not have to last forever, but when it remains untreated, it can certainly last a lifetime,” Shreya Mandal writes in Social Work Helper. With refugees, it’s particularly critical given the challenges they face adapting to a new culture, language, and community—sometimes in less-than-welcoming conditions.

Social workers, with their knowledge of trauma and abuse, presence in the community, and commitment to social welfare and justice, are well positioned to help. Here are a few ways. For refugees, every stage of the journey can be filled with trauma. “Pre flight” they may have witnessed political violence, social upheaval, physical or emotional harm to family members, even murder. Some, such as child soldiers, may have inflicted violence themselves. “Flight” often involves a treacherous journey fraught with peril, hardship, and uncertainty. After arrival, detention, separation from family members, racism, and abuse are too often part of the experience.

Through their understanding of PTSD symptoms and knowledge of appropriate evidence-based treatment practices, social workers can contribute greatly to timely, accurate PTSD diagnosis and treatment.

Through Trauma-based Cognitive Behavioral Therapy (TB-CBT), for instance, social workers can carefully guide refugees through disturbing memories while weaving in therapeutic elements such as relaxation techniques. With imagery rescripting, refugees can imagine a traumatic event with an intervention that causes a more favorable outcome, and with narrative exposure therapy, they can tell their trauma stories in a ritualized fashion to defuse the emotional repercussions.

In cases with language barriers, or where verbalization is an issue (with children, for example), Eye Movement Desensitization and Reprocessing (EMDR) helps clients use eye movements, sounds, and repetitive motions to create new associations for traumatic memories and reduce sensitivity to triggering events.

According to research done by Germany’s chamber of psychotherapists, roughly 40 percent of asylum seekers have suicidal thoughts. Social workers can raise awareness of this situation and help immigration officials understand the symptoms to look out for.

In direct practice, they can bring evidence-based practices to refugees at risk. As one example, having an actionable crisis plan—say, a card with warning signs, coping strategies, and people to call—has shown measurable suicide prevention success in the veteran community.

Even after many of the physical dangers of flight are gone, resettlement presents challenges of its own. Refugees must deal with loss of culture, community, and language while adapting themselves and their family members to a new environment. Meanwhile, refugees may feel numbed by past events, with limited ability to cope.

Here, also, a social worker’s toolkit of evidence-based practices can help. To assist with day-to-day functioning, Acceptance and Commitment Therapy (ACT) can help refugees tap into values they admire—like the strength and courage of a well-loved fictional character—to cope with debilitating symptoms like panic attacks. For overall healing, ACT can help refugees find meaning in trauma, and move forward in values-based action.

As a social worker, you can play a valuable role for refugees outside of clinical practice as well. In immigration detention facilities, for instance, outdated tools, outmoded diagnostic resources, and under-treatment, remain common. You can work with these organizations to integrate current, evidence-based frameworks into their work and into the legal and correctional system overall.

And through your understanding of the clinical, cultural, and societal aspects of trauma, you can help educate policymakers and the public about the importance of PTSD identification and treatment in refugees and the need for PTSD-specific training and resources in refugee-serving organizations across the country.

Through all these actions and more, you’ll be helping individuals adjust and communities adapt in the wake of some of our world’s most horrific events—which is what social work is all about. As PTSD therapist Hannah Murray relates in The Guardian:

“Trauma memories are not forgotten, but they can fade. Through treatment, clients achieve goals which many of us take for granted, like sleeping through the night without nightmares, or meeting new people without fearing they will be attacked. Things which were previously out of reach because of their symptoms, like working and having relationships, become achievable.”

If you are interested in pursuing your Master’s in Social Work, or even if you’re simply interested in discussing the program, please reach out to an Enrollment Counselor at (207) 221-4143 or via email at socialworkonline@une.edu. Or, fill out an online application now at online.une.edu/gateway-portal-page. We look forward to hearing from you!

One response to “Social Work: Helping Refugees with PTSD”