We’ve received several requests to dive more purposefully into the nitty gritty of using Blackboard, and so today we conducted the first in a series of webinars on it, focusing on the Grade Center. As we found ourselves jumping rather quickly from tool to tool, we think the video may be less valuable as a recording than a textual breakdown, with screenshots, that you can jump through at will below. 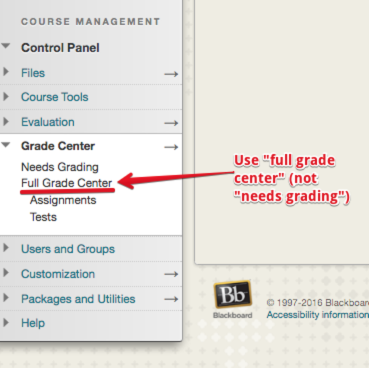 The Invisible Scrollbar (on Mac computers) 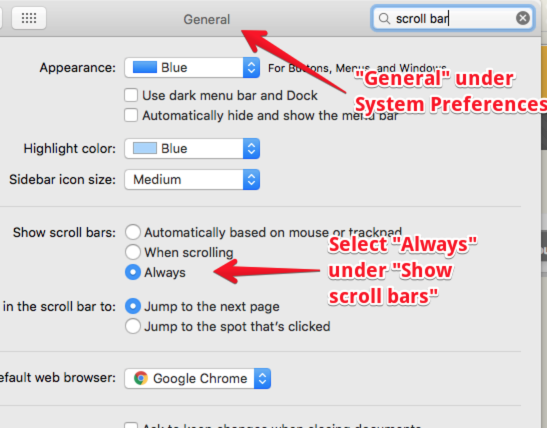 The scrollbar will sometimes not appear when navigating the Grade Center. If you encounter this, it may be a problem you can resolve with your computer settings.

NOTE: This is a known problem with Blackboard running on Mac computers, and as such the solution is for Mac computers. 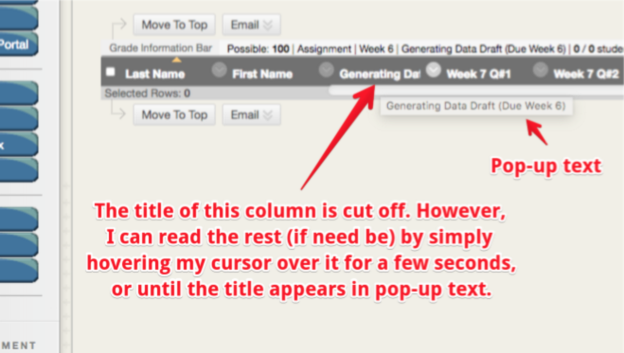 Because of how the grade center is displayed in Blackboard, it can be difficult to read the titles of grade columns.

To deal with this issue, simply hover your cursor over the column title you wish to read. The full title will pop up below and to one side. 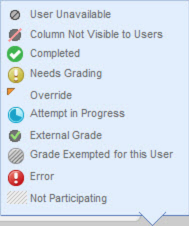 The icons used in Blackboard to quickly relay information about Grade Center details can be confusing. Here are some brief explanations for commonly seen icons, shown above:

Column Not Visible to Users – You may be able to see this column, but students cannot.

Needs Grading – Students have submitted work for this assignment that has not yet been graded.

Attempt in Progress – Students have submitted work, but not yet met the minimum requirements (example: submitted the minimum number of discussion posts). Or, student has begun and not finished a test.

Not Participating – This specific student’s final grade is not going to be calculated using this specific column (most often because that student isn’t in the group to which this column is assigned – see below). 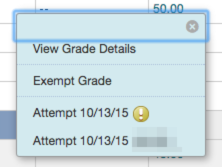 Some assignments will allow students to submit multiple times. When this is the case, it should be clear between course policies and instructor-student communications which of the “Attempts” (submissions) is supposed to be graded. In almost all cases, unless informed otherwise by your instructional designers or instructors of record, the grade that is awarded most recently will be the one to appear in grade center calculations.

To find attempts, click the chevron that appears in a grade center cell when you hover your cursor over it. The attempts, if there are any, will appear alongside their dates of submission.  Click an attempt to begin grading it.

Note: It is general policy to never delete attempts, regardless of whether they are mistakes or not. Deleting an attempt is the same as deleting student work. Please refrain from doing so.

To access the rubric, enter the in-line grading view by selecting the attempt you wish to grade. 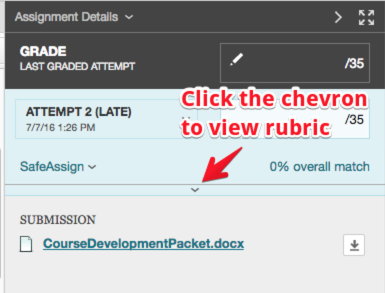 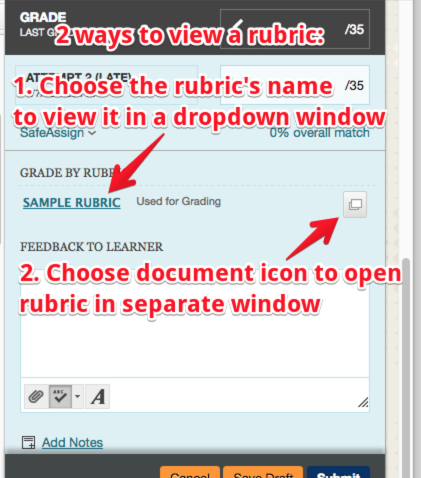 When the rubric opens, you will be given two options: to either access it via a dropdown menu or via a popout window.

Once you’ve accessed the rubric, make sure to select both boxes at the very top of the rubric so that you will be able to see both the descriptions for the various criteria and the fields for entering feedback. 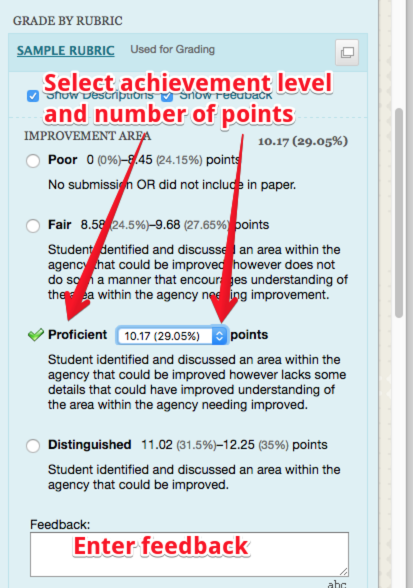 Feedback is important to contextualize the grades you give your students and show them the paths that will lead to their future improvement.

NOTE: Many courses do not use SafeAssign. If you do not see the option to access SafeAssign reports, as shown below, then please disregard these instructions. 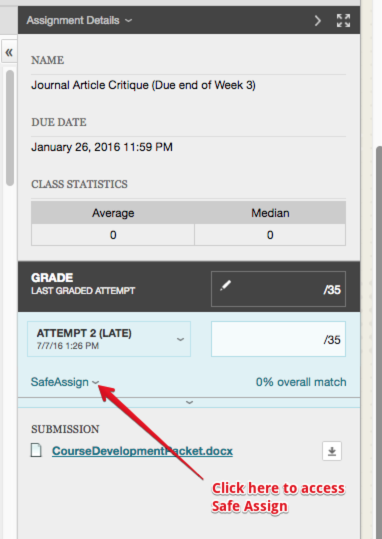 In the sidebar that appears when you access the in-line grading tool within Blackboard, you’ll see a little blue dropdown labeled SafeAssign.

To access the more detailed report tied to that assignment, hit that dropdown and then select “View Originality Report.” 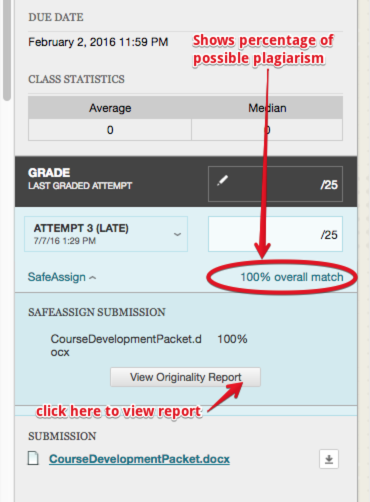 It is important you always study the report before assuming the paper has been plagiarized, even when the “overall match” reads 100%. That number can be very misleading. We went into more depth on the complexities of SafeAssign reports in this webinar. 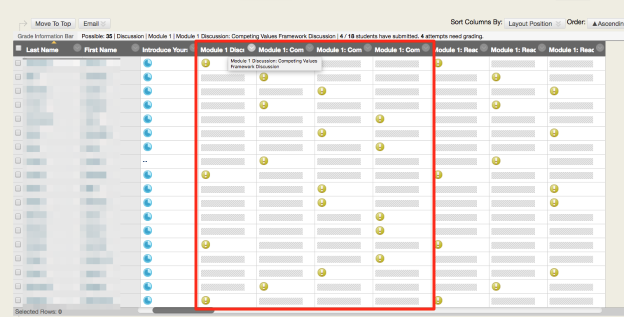 If your course uses discussions within groups, there are often situations wherein each group has its own version of the same forum. If that forum is linked to the grade center, then each instance of it (one to be found in each of the groups) will appear as its own column within the grade center. Because the students are divided up between the groups, there are columns for which they should not be graded. The only cells not grayed out for any given student indicate the column in which the students should be graded for that assignment.

See above: There are 4 groups, that’s why there are 4 columns for Module 1 discussion. If a student is not enrolled in a group, the grade column is greyed out. If all columns are greyed out for a student, it means that student is not in any group (almost always a mistake needing rectification). 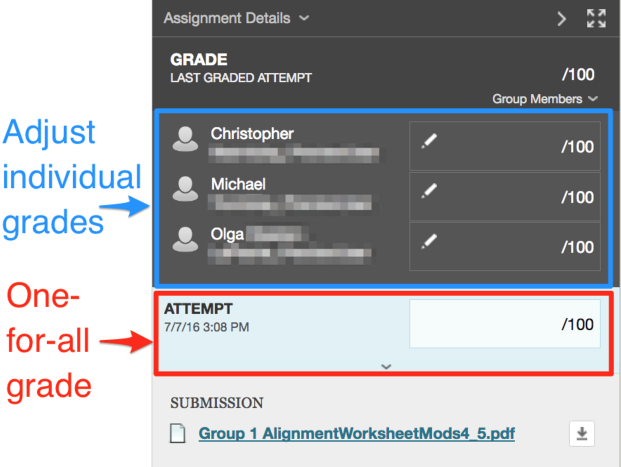 Group assignments are used sparingly in CGPS courses. They allow the faculty to award a single grade with feedback that will be given to all the members of that group and calculated in each of their grades. If you suspect that an assignment is a Group Assignment but didn’t expect it to be so, please contact your lead instructor for clarification.

Grading a Group Assignment is similar to grading a generic assignment, except that above the section where the rubric is accessed and a grade/feedback is given there appears a black box within which the individual grades of group members can be distinguished from one another should the faculty choose to do so (see above).