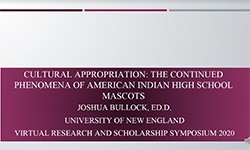 This qualitative study examined two research questions through critical race theory and transcendental phenomenology: (1) what value do school administrators ascribe to their school’s American Indian mascot? and (2) how do school administrators perceive and describe how an American Indian mascot influences their school culture and identity? Nine public school leaders participated. Data were collected through one-on-one semi-structured interviews and the data were transcribed and analyzed. Three themes were discovered from the data: (1) the mascot’s symbol binds the community together by symbolizing pride, unity, strength, and togetherness, (2) the history and identity of the mascot transcended any benefit to changing it, and (3) the mascot is seen as a positive symbol. The researcher interpreted the themes using transcendental phenomenology, which led to the composite description of leaders within a public school that has an American Indian high school Mascot.

The study provided two recommendations for leaders, including exploration of the mascot’s impact on American Indian students and meeting with Tribal leaders and Tribal community members. The researcher encouraged further study by recommending an examination of American Indians and people of color in leadership positions and their ascribed meaning in public schools with American Indian mascots and further study in different regions of the United States.