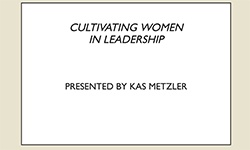 The study was inspired by the statistics that show the current representation of women college presidents at two and four-year public institutions in California is greater in comparison to the national statistic. The researcher became curious as to how and why women college presidents in California were thriving in a system that, according to the statistical representation as well as the literature, was not optimal. There were four main research questions that served as the platform for interviews with 26 current college presidents of 2 and 4-year institutions in California. Using complex adaptive systems as the conceptual framework for the research, themes emerged as data were analyzed. The paradigm that encapsulates the essence of the findings in this research is emotional intelligence (EI). The shared purpose of higher education in California is to serve students yet the mechanism of how to do that requires adaptive, intuitive and situational decisions. This study illuminates directly from the source- the knowledge, skills and abilities to make that reality.