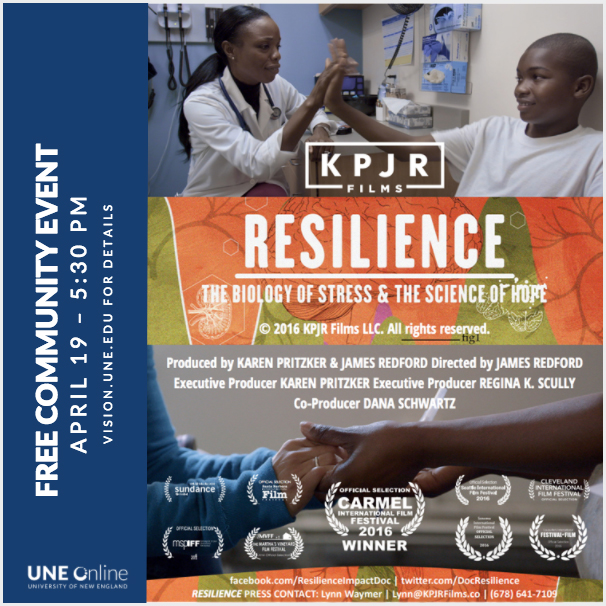 UNE Online and the Junior League of Portland have teamed up again this year and are proud to present the documentary Resilience: The Biology of Stress & Science of Hope.

The event will begin 5:30 pm with opening remarks from Arabella Perez, LCSW of UNE’s Master of Social Work program, to discuss her work with trauma-informed care. The screening will follow.

About the documentary Resilience

This 68-minute documentary delves into the science of ACEs and the birth of a new worldwide movement to treat and prevent Toxic Stress. The movie premiered at Sundance Film Festival to sold-out houses.

Resilience is the second documentary by director James Redford (son of Robert Redford) that addresses ACEs. The first was Paper Tigers, which follows six students during a school year at Lincoln High School in WA, the first trauma-informed high school in the U.S. Paper Tigers has been screening to sold-out audiences around the U.S. since it premiered at the Seattle Film Festival last year.

About ACEs and the biology of stress

Childhood experiences, both positive and negative, have a tremendous impact on future violence, victimization, perpetration, lifelong health, and opportunity. As such, early experiences are an important public health issue. Much of the foundational research in this area has been referred to as Adverse Childhood Experiences (ACEs).

Now understood to be one of the leading causes of everything from heart disease and cancer to substance abuse and depression, extremely stressful experiences in childhood can alter brain development and have lifelong effects on health and behavior. However, as experts and practitioners profiled in Resilience are proving, what’s predictable is preventable.

Physicians, educators, social workers and communities and others in the caring professions are beginning to open the discussion about the effects of divorce, abuse and neglect – and they’re using cutting-edge science to help the next generation break the cycles of adversity and disease.

About the original ACEs study

Authored in 1991 by a San Diego physician and a researcher for the CDC, the CDC-Kaiser ACE study, as it is commonly known, looked at the health records of 17k largely white, educated, upper middle class people. It then asked these same 17k patients to answer a questionnaire regarding the prevalence of chronically adverse conditions during childhood. They were shocked at what they discovered. The more these adults dealt with abuse and neglect as children, the worse their health outcomes were later in life.

Breaking the cycle of toxic stress

Through sharing statistics and survey results revolving around early life traumas and toxic stress, the documentary Resilience allows for everyone to get a better understanding of the impact we can make in the lives of children, whether we know them or not.

Problem kids and problem teens are rarely that way by choice. Rather, it is evidence of an issue that deserves compassion instead of condemnation. The more broadly this simple message is understood, the better chance we have of helping kids emerge from difficult childhoods into a future with promise.

Have additional questions? Reach out! We have Enrollment Counselors for every program available Monday through Friday, 8 am to 5 pm, and they would be happy to speak with you via email at owladmissions@une.edu or over the phone at (855) 325-0896.

Ready to apply? Go to online.une.edu/gateway-portal-page to start your application today!