Infographic: PTSD and Trauma in Veterans

This PTSD infographic illustrates that that trauma can occur anywhere, for anyone – and sometimes in unexpected places. Almost anyone can suffer – and almost all can be helped.

We hear a lot today about trauma and post-traumatic stress disorder, or PTSD. A National Association of Social Workers newsletter article recently made the case for trauma as “the new public health crisis.” Some believe PTSD is a problem only for those who have experienced war or violence. Others say they’re seeing references to it everywhere, and wondering: Can it really be that prevalent?

The truth rests somewhere in between. We’re learning more about trauma and PTSD every day, and social workers are responsible for some of the cutting-edge research and breakthrough treatments.

Trauma and PTSD have always been with us, even though they may have been known by other names, such as shell shock. And they can occur to anyone, anywhere – young or old, of different genders and identities, rich or poor. People suffering may express PTSD and trauma by being silent and detached, or by raging, or by panicking.

Today, we can be both more precise in identifying these conditions and more hopeful in treating them. As a social worker, you’ll likely encounter trauma and PTSD in some of these settings and circumstances.

Today, we recognize that PTSD is experienced not only by the “boots on the ground” personnel returning from war, but also by technicians and those in service professions. With the advent of remote drone warfare, many thought PTSD would be reduced – only to discover that instances are just as common if not more so. In addition, sexual assault and harassment, an acknowledged problem in military environments, can contribute to PTSD.

Trauma and PTSD can contribute to other problems such as domestic or partner violence and the high rate of homelessness among veterans. PTSD social work is valuable because social workers are uniquely qualified to see how these issues interrelate.

A hopeful and growing area in social work incorporates methods that help not only the individual with PTSD, but military families as well. Assisting in getting integrated back into working life is another important area where social workers can assist veterans with PTSD.

More and more, it’s being recognized that women who lose a child or go through a difficult birth experience can experience PTSD. The American Pregnancy Association says about a quarter of pregnancies end in miscarriage. The sense of loss of integrity of the physical body and the threat to the life of the baby can have the same effect as a violent incident. The physical difficulties compound the emotional ones, but post-partum PTSD is neither all physical nor all emotional.

Social workers can help in hospitals or in private practice settings to lead women and their families back to a sense of wholeness and possibility, watch for danger signs, and assist a woman through grief and into resuming daily life tasks.

PTSD related to childhood sexual abuse may surface years after the abuse occurred and mask itself as other problems, from risk-taking to substance abuse. Social workers understand the interrelationship of abuse, neglect, and family dysfunction and have the training to see what may lie beneath.

Today, much greater attention and resources are being directed toward stopping human trafficking. Social workers are instrumental in helping restore health and wholeness to children who have been trafficked. On a macro level, social worker research can help direct the right resources in the right ways, develop effective policy, and implement solutions that involve schools and communities. 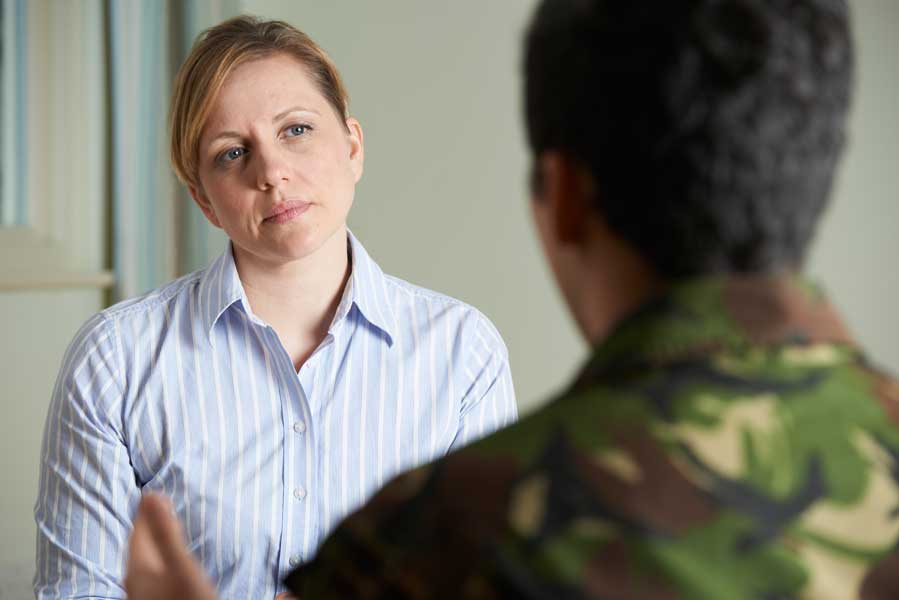 The increased use of solitary confinement ands social PTSD. Gender- and identity- related violence in prisons. Detention, often long-term, for immigrants. Young people in adult prison populations. Traumatic brain injury from violence either before or during incarceration.

These social PTSD issues in our prisons are being widely documented and are impossible to ignore. They’re also a formula for PTSD – which Shreya Mandal, JD, LMSW, says is reaching epidemic levels. This epidemic long went underdiagnosed and untreated – because of barriers Mandal and others identify as relating to culture, language, resources, and trust.

With the current awakening comes opportunity: Through trauma studies graduate programs, social workers can reduce the incidence of violence and suffering within incarceration settings and help those who experience PTSD navigate the already tough re-entry to “life on the outside.”

Being torn away from one’s home is hard enough. But many refugees and immigrants are also separated from their families. And many have been victims of violence, rape, torture, and enslavement. Any one of these factors alone could result in PTSD.

For refugees, “the social fabric has been ripped,” says Beth Farmer, LICSW, who directs a trauma and torture treatment center. PTSD behavior such as panic attacks or “numbness” can be misinterpreted by those around them as anything from peculiar to dangerous, adding to the precariousness of their position.

Unfortunately, today the policing atmosphere can compound the danger of developing or worsening PTSD. Associations and journals say social workers are urgently needed in this area—and those who are bilingual or multilingual can make a world of a difference.

If you are interested in pursuing your Master’s in Social Work, or even if you’re simply interested in discussing trauma studies within the program, please reach out to an Enrollment Counselor at (207) 221-4143 or via email at socialworkonline@une.edu. Or, fill out an online application now at online.une.edu/gateway-portal-page – we look forward to hearing from you!