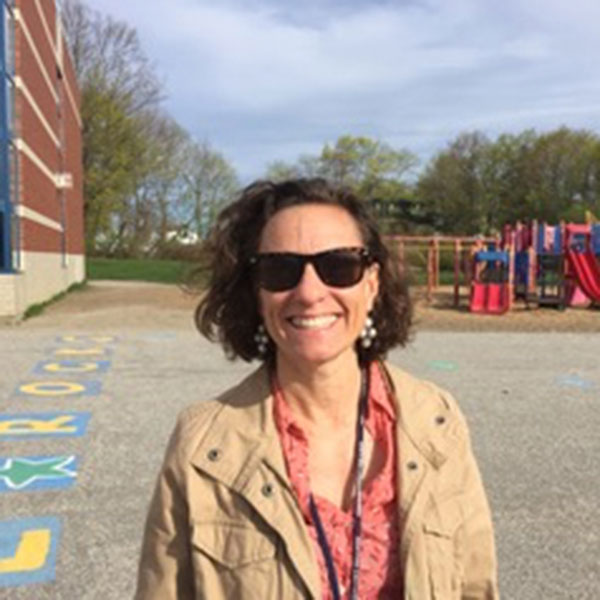 Rachael Flaxman is an elementary school teacher in Maine and a student in our online MSEd program. We celebrated Teacher Appreciation Week by speaking with some of our students who have dedicated their professional lives to education.

Teachers make a profound impact on the lives they touch, so we want to honor some of these very special teachers who are also our students, and who are making a difference every single day in their classroom.

Happy Teacher Appreciation Week! Can you tell me a little bit about yourself, and what encouraged you to pursue your Master’s in Education?

I was a little bit later coming to teaching. I didn’t start teaching until I was about 30. We lived in California and I got my teaching degree out there. I taught just for a couple of years in California before taking quite a few years off to be home with my kids, but I’ve been back in the classroom for about ten years now.

I decided that it was time to earn my master’s because professionally, I wanted to challenge myself and just find out what the latest and greatest is in teaching. One of my coworkers is also in the program, and having a friend to do it with has been great. We talked about it for about a year and waited until it was the perfect time for both of us.

I’m also at a point in my career where my kids are older – my youngest is just graduating from high school – so they didn’t need as much support and time. But also I still have enough years ahead of me that it’s worthwhile to put the time in to improve my teaching. Getting my master’s will also bump me up a little bit on the salary scale, and my district pays for the vast majority of it, so in all, it just seemed like it was the right thing to do now.

Do you have a concentration or particular focus area for your MSEd?

My concentration is in Literacy, and I’m nearly done. I’m going to be taking my last class this summer, which is so exciting!

How did you feel about the flexibility of the program?

Most times it’s felt really manageable, and sometimes it’s felt a little overwhelming. I’ve chosen to do this program over the course of three years, so I took just one 8-week class each 16-week semester. I generally have tried to plan it so I take a class and then have eight weeks off and then take another class. It hasn’t always worked perfectly so there have been times that I’ve taken back to back classes, but then I know I have eight weeks of breathing space coming up.

That flexibility in spacing out my classes has allowed me to keep my sanity while also feeling like I could be a good parent and a good teacher. It’ll have taken me just over three years by the time I finish. It’s really nice to see the light at the end of the tunnel!

The class I’m taking right now is an exception to the eight weeks on, eight weeks off schedule. It’s the Action Research class and is similar to what might be considered a capstone project in other programs. It’s a 16-week class, and that has felt long.

Having two busy kids and a busy life myself, doing the entire MSEd program in a year and a half would not have worked for me. I have a colleague here that went through the same graduate program at UNE Online, and she did it straight through in the year and a half, but I just felt that a more flexible schedule would work better for both me and my family. And I’ve found that it has – it’s been a very reasonable way to go back to school.

Can you talk a little bit more about the Action Research class, and your research?

The class requires you to look for an area where you would like to focus, something to change within the instruction in your classroom. It needs to be something you feel that you would like to do research on and develop further. First, you research the topic an explore what other related studies have been conducted, and then you develop an intervention designed for your class. I teach first grade, and I chose to do my intervention on the development of a writing skill – specifically how to get kids to appropriately capitalize letters in their writing.

We spent the first five or six weeks doing a lot of research about what research has been done on the topic in the past, and then spent four weeks implementing the intervention, and finally, we spent the last two or three weeks coming up with our conclusions. Throughout the whole process, you’re building on and writing the research paper that becomes your final project. It’s similar in scope to what other programs would call a capstone project or a thesis. You’re researching, devising an intervention, putting that plan into action, and then evaluating its effectiveness. An important part of the program is that I have access to a classroom full of students.

What’s interesting is that I find the discussions that we have online, to be valuable. I was skeptical about that aspect, going into an online program. I was really excited by the flexibility that it afforded me, but I was also skeptical that it was actually going to be able to replicate that kind of interaction that you have in an on-ground discussion. But I have found the discussions to be really useful and valuable.

Have you found the online atmosphere conducive to feeling that you’re in a community?

You know, in particular in this latest class, Action Research, I really have felt like was a part of a community, but I’ve felt it to different degrees in different classes as well. It’s just that Action Research is held over a much longer period of time, and we broke into small groups for probably seven or eight weeks of our discussions. We had the same small groups of five throughout the 16 weeks while we were writing our paper and actually implementing our intervention in our classes.

The small group discussions were a really neat way to connect. We became familiar with each other’s research, so we could really help each other out, question each other, and support each other. That was the most intimate and helpful model so far. And in other classes, we’ve broken into small groups for smaller periods of time, but short of showing up to a classroom and seeing people face-to-face, I think the small group discussion format has done a really nice job of replicating some really important discourse that has to happen in this kind of program.

I also have a coworker going through the program with me, and that’s been wonderful. Even when we’re not taking the same course, just to have someone who knows the challenges that you’re facing, is great. And we both have kids who are seniors in high school, so we’re in very similar boats, which is nice as well.

If there’s one thing you would want a potential student to know before starting this program, what would it be?

At some point, you’re going to get overwhelmed by what’s ahead of you. When that happens, just really try to put your head down and look at where you are right now, and just deal with that right then.

I know that my latest class, in particular, has been a little daunting as far as just the scope of what we had ahead of us. But the work was broken down really into very manageable steps, and when I really focused on what I had to do each week, it was really manageable. When I looked too far ahead I would get overwhelmed. I think that that could be used as kind of a model for the whole program. Just take it each class at a time, one step at a time.

For me, even though I’m completing this degree over three years, I can’t believe how fast it’s gone. For somebody doing it one class after another, I think they’ll realize that they‘re going to blink and it’ll be over! So I would say try to not be overwhelmed and really use your classmates for support and as resources, because I think that’s really helpful.

There’s definitely a sense of accomplishment in the process of getting your Master’s degree – so make sure that you celebrate each time that you finish a class or a project!

If you are interested in the online Graduate Programs in Education or if you would like more information on UNE Online’s MSEd, PMC, CAGS or Ed.D. programs, please reach out to an Enrollment Counselor at (800) 994-2804 or via email at education@une.edu.

Or, if you’re ready to apply, fill out your online application at online.une.edu/gateway-portal-page.