For a comprehensive overview of our Graduate Programs in Public Health 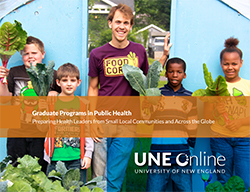 Accredited by the Council on Education for Public Health

UNE’s chapter of Delta Omega, Gamma Chi, was established in the spring of 2014. On an annual basis, a select number of top-performing Master of Public Health (MPH) students are granted membership into Gamma Chi. Members enjoy a variety of benefits, including access to a number of leadership development and publication opportunities, professional networking events, and discounted resources. 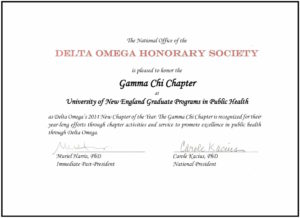 In the fall of 2014, Gamma Chi was named the “New Chapter of the Year” by the Delta Omega National Council. This honor is awarded to new chapters, established for three years or less, that have displayed the most activity, service, and participation.